Los Angeles, officially the City of Los Angeles and often known by its initials L.A., is the largest city in California. With an estimated population of nearly four million people, it is the second most populous city in the United States (after New York City) and the third most populous city in North America (after Mexico City and New York City). Los Angeles is known for its Mediterranean climate, ethnic diversity, Hollywood entertainment industry, and its sprawling metropolis. Los Angeles has a diverse economy and hosts businesses in a broad range of professional and cultural fields. It also has the busiest container port in the Americas. The economy of Los Angeles is driven by international trade, entertainment (television, motion pictures, video games, music recording, and production), aerospace, technology, petroleum, fashion, apparel, and tourism.[citation needed] Other significant industries include finance, telecommunications, law, healthcare, and transportation. Los Angeles is the largest manufacturing center in the United States. 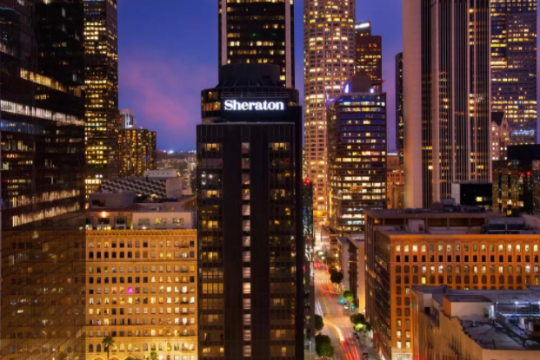 Located in the centre of the Los Angeles downtown financial district, this full service business and convention hotel is an inviting and contemporary retreat for any lifestyle. Rooms at the Sheraton Grand Los Angeles are air-conditioned and include a flat-screen TV, a coffee & tea maker, a hairdryer, and an iron with ironing facilities. Sheraton Grand Los Angeles offers a restaurant and a relaxing lounge. You can also keep up your fitness routine at the on-site fitness center at the hotel. LA Live is only 0.8 km from the property, while Microsoft Theatre is .86 km away. Dodger Stadium is 3.3 km away.Sheraton Grand Los Angeles is located in the heart of the Entertainment Capital of the World. It is an easy walk to the Los Angeles Convention Center, Staples Center and LA Live. The hotel is adjoined by Macy’s plaza. 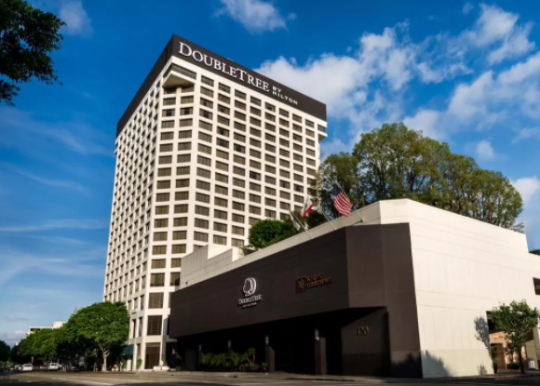 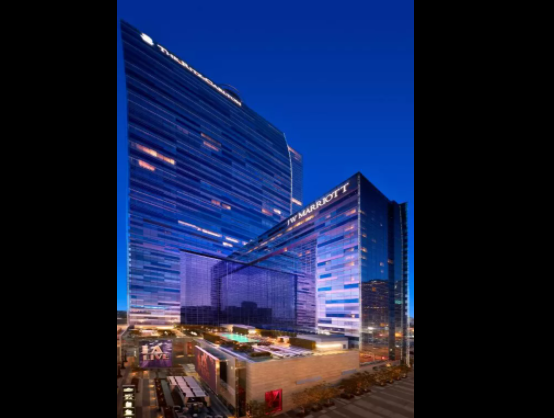 Located less than 1.6 km from the Staples Center and Nokia Theatre, JW Marriott Los Angeles L.A. Live offers luxurious rooms with a 42-inch flat-screen TV and Wi-Fi access. Facilities include an outdoor rooftop pool. The air-conditioned rooms enjoy a modern interior. All rooms are equipped with an iPod docking station, a mini-fridge, and coffee and tea making facilities. Room service is available 24/7. The outdoor rooftop pool offers panoramic views of the city. JW Marriott Los Angeles at L.A. Live also features a fitness center, a spa, and a concierge service. Choose from 6 different restaurants and bars offering national and international dishes. The Grammy Museum at L.A. Live and the L.A. Convention Center are both located less than one block from the JW Marriott. 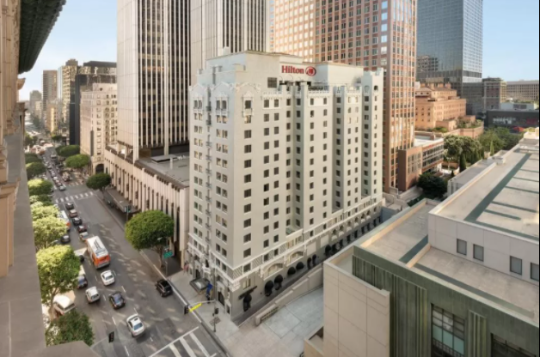 Just 5 minutes' walk from Pershing Square Subway Station, this European-style hotel features a restaurant, gym and rooftop that overlooks downtown Los Angeles. Every room offers a 42-inch flat-screen TV with HBO. A CD player and desk are provided in the contemporary rooms at Hilton Checkers Los Angeles. There is a coffee maker along with an arm chair. The bathrooms have a glass-enclosed shower and robes. Checker’s Restaurant offers California cuisine with French and Asian influences and serves breakfast, lunch and dinner. Guests at Hilton Los Angeles can enjoy a martini in Checker’s Lounge. Situated in the business and financial district of Los Angeles. 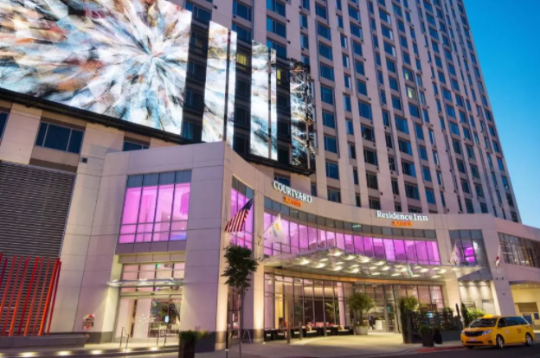 Offering an on-site restaurant and a fitness centre, Courtyard Los Angeles L.A. LIVE offers rooms with free WiFi. L.A. Live entertainment venue is just 100 m away. A cable TV with pay-per-view channels and a seating area are provided in each air-conditioned room at this hotel. Complete with a refrigerator, the dining area also has a coffee machine. The private bathrooms come with a hairdryer and guest bathrobes. A 24-hour reception is offered to guests of Courtyard Los Angeles L.A. Live. A mini-market is located on site and coffee is available in the lobby. Other facilities offered at the property include meeting facilities, dry cleaning and laundry facilities. The hotel is 200 m from Microsoft Theater and 300 m from Staples Center. 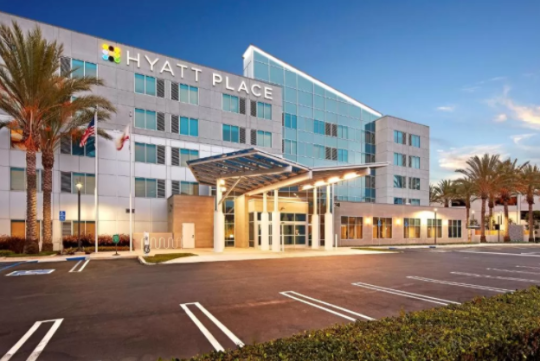