Edinburgh is the capital city of Scotland and one of its 32 council areas. Historically part of the county of Midlothian (interchangeably Edinburghshire before 1921), it is located in Lothian on the Firth of Forth's southern shore. Edinburgh is Scotland's second-most populous city and the seventh-most populous city in the United Kingdom.Recognised as the capital of Scotland since at least the 15th century, Edinburgh is the seat of the Scottish Government, the Scottish Parliament and the highest courts in Scotland. The city's Palace of Holyroodhouse is the official residence of the monarch in Scotland. The city has long been a centre of education, particularly in the fields of medicine, Scots law, literature, philosophy, the sciences and engineering. After London, it is the second-largest financial centre in the United Kingdom, and the city's historical and cultural attractions have made it the UK's second-most visited tourist destination, again after London, attracting 4.9 million visits, including 2.4 million from overseas in 2018. 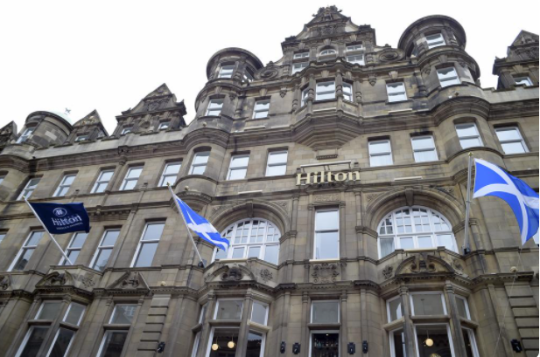 Overlooking The Royal Mile, the Hilton Edinburgh Carlton has a stylish cocktail bar and modern brasserie. Lively Princes Street is just 300 m away and Waverley Rail Station is directly adjacent to the hotel. Free WiFi is available throughout the hotel. The hotel is a 10-minute walk from Edinburgh Castle. Holyrood Palace is half a kilometer away. The spacious, 4-star bedrooms at Hilton Edinburgh Carlton each have a private bathroom with Peter Thomas Roth toiletries. Rooms also feature a work desk and HD free view TV. Marco Pierre White Steakhouse Restaurant offers a traditional British menu and some of Marco’s classic dishes. Nineteen Hundred Bar features a lounge, and offers a range of cocktails, a selection of whisky and light snacks and meals. 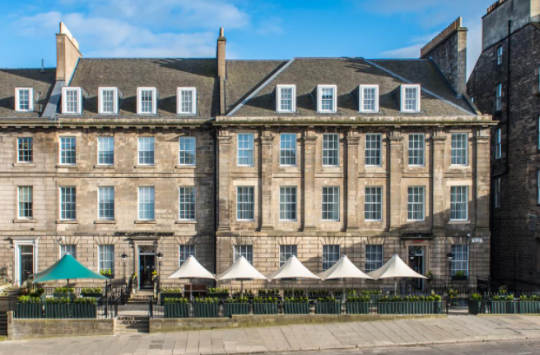 Courtyard by Marriott Edinburgh offers accommodation in Edinburgh, in a prime location at the foothills of Calton Hill and just a five-minute walk from Princes Street. It offers complimentary WiFi, an on-site bar and free access to the gym. The spacious, modern rooms feature locally-inspired furnishings and quality amenities, such as a flat-screen TV, plush bedding, and a work desk. Each private bathroom comes with a shower and complimentary toiletries. Guests can enjoy their meals at The Lantern Room, the on-site restaurant, serving a wide range of local and international dishes. The reception is open 24 hours. Edinburgh Playhouse is 30 m from Courtyard by Marriott Edinburgh, while Omni Centre is 200 m away. 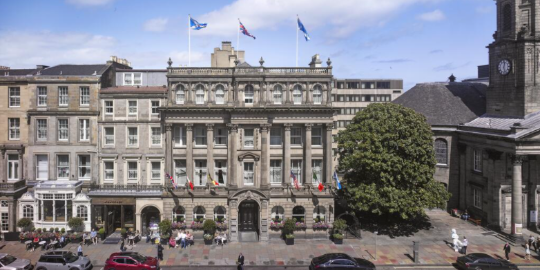 Boasting an enviable location in the Edinburgh city centre, the historic and chic, InterContinental Edinburgh The George, is close to Edinburgh Castle, Princes Street Gardens and Holyrood Palace. It has elegant rooms, conference and meeting rooms and a gym. This Grade II listed building with its distinctive facade was built in 1775 and has undergone a great refurbishment project transforming the majority of the bedrooms and public areas. The architecturally-designed interior has created a sense of restored grandeur with simple detailing and the use of natural materials. Each room features a flat-screen TV, free WiFi, and an en suite bathroom. The Printing Press Bar & Kitchen serves seasonal Scottish produce throughout the day and night. It is open 7 days a week offering breakfast, lunch and dinner. 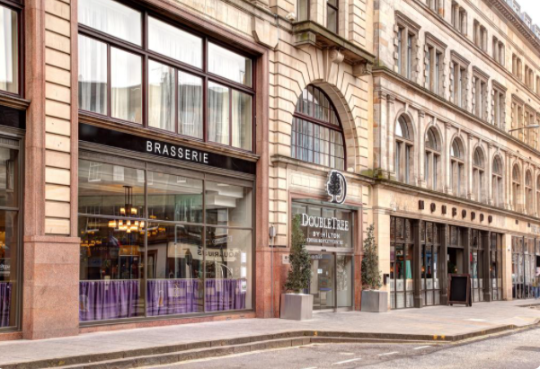 Located in the heart of Edinburgh, Doubletree by Hilton Edinburgh City Centre offers fantastic views over Edinburgh Castle. Edinburgh International Conference Centre is just 400 m away and there is free Wi-Fi in the public areas. Built in 1892, this beautiful building is only a 10-minute stroll from the shops of Princes Street and vibrant local night life. The modern en suite rooms have luxury Egyptian cotton bedding, hairdryers and tea/coffee. The Monboddo Bar has stylish leather seating and is open until 01:00. The award-winning Bread Street Brasserie serves modern and classic dishes. The menu includes fresh Scottish beef and fish. 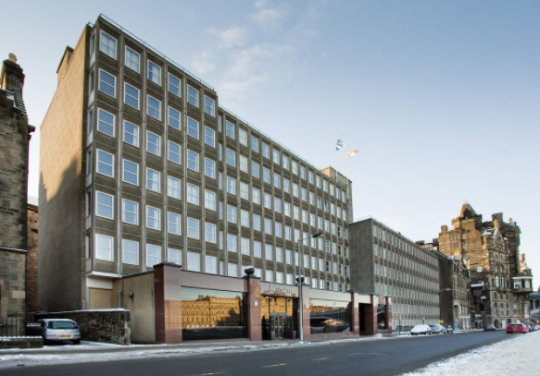 In the heart of Edinburgh's Old Town, right beside the Royal Mile and less than a 5-minute walk from Waverly Train Station, Jurys Inn Edinburgh has a 24-hour reception. The bedrooms feature Dream beds with crisp white linens, large-screen TVs and spacious bathrooms with spa toiletries, as well as large work space area, tea and coffee refreshment dock and high-speed WiFi. Breakfast is available daily as a pre-packed balanced option delivered to your room. The modern restaurant offers an international dinner menu. The bar serves lunch and snacks as well as coffee. Edinburgh Castle, Princes Street, Holyrood Palace, the International Conference Centre are within short walking distance, as well as shops, theatres, museums and galleries. 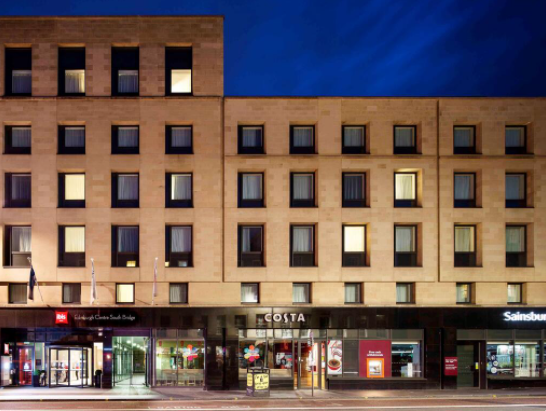 A 5-minute walk from Waverley Train Station, ibis Edinburgh Centre South Bridge – Royal Mile provides centrally located accommodation in the Old Town. This Ibis hotel has a bar and restaurant, and offers free WiFi. Furnished with Ibis Sweet Beds, each air-conditioned room has a flat-screen TV, desk, hairdryer and tea and coffee facilities. All have en-suite bathrooms with shower and complementary toiletries. The restaurant serves international cuisine from lunchtime until late evening, and is complemented by a relaxing bar which also serves snacks. ibis Edinburgh Centre South Bridge – Royal Mile is around 9 minutes’ walk from Edinburgh Castle, and Holyrood Park is around 15 minutes away.